This is where we discuss about the current ongoings in the fishing community such as news, events or general fishing topics.

wassup all..
wonder why is FK so noisy and HLF so quiet?!?!
its been a long time since i've posted.
anyway, few fishing stuff happened over the past month i'd like to share

1. got a med size catfish at a spot near TMFT. quite good spot to chill and fish. but accessibility is quite a problem.
2. found another fishing spot nearby 1., with better accessibility but bad lightings. and seems like a popular night fishing spot for most anglers and a couple of them were setting up their rods at about 12am.
3. went to new paid pond last weekend. "Ah Lim" located at Lim Chu Kang Lane 6F. very small pond with many anglers there. didnt try there and went to "Aunty Pond" at Neo Tiew Cres instead. got a small seabass and ang chor.
4. bought a Aernos 8000 with powerpro 40lbs braided line for next month Msia fishing trip. happy

so what's going on with the rest? i dont see any new topics going on

Heh, HLF has always been on the quiet side but I agree it's been too quiet lately. I guess everyone's busy or possibly losing interest seeing how catch rate and spots declined over time. I've not done any shore fishing for at least two months but have been on a local offshore trip or two. I will try to go fishing this weekend at my old spot, see if I can catch anything to share with you guys.

Here's my cutest catch from my previous offshore trip. 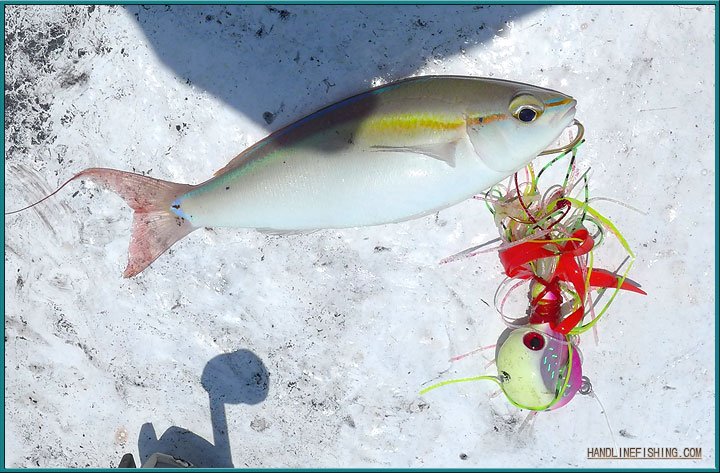 Thanks for dropping by teamilk, it's good to know you're still actively fishing and loving this hobby. I hope other members too, can share their recent fishing anecdotes.

I've done a bit of fishing 1 month ago. 4 KBLs about 30cm. The interesting thing is Ngo he soon about 20cm. Unfortunately, I've no pictures. I seldom get this fish, then one trip there were 2 by cast nets. Then another time, I spin a float with life prawn, it eat the prawn. Had several miss, maybe it is this fish, but after that I keep getting Sengsters.
Top

That's pretty good, I wish you had taken a picture of the gor heurr soon though. I'm trying to catch one myself.

did you eat that whiptail peace?
Top

No, it's not on my list of favourite fishes.

These whiptails can really deplete your baits, even when using madai jigs they will nip off the rubber strands on the madai skirt. Ferocious little guy.

Whiptails are quite common. Whenever i go offshore sure to catch a few of them
Top

nice to know many of you still around!

Hey Peace, i have a few photos i'd like to share, can i send to you and you help me upload and insert at the right paragraphs?

Pictures of my recent catches: 1st night (big catfish)
big size! about 2kg, length about 2 size 12 slippers!
got a huge pull from 1 of our rods almost immediately after i casted. after striking, i passed the rod to my friend who just started fishing not long. wanted to let him have a feel of hooking up a fish. he did a good job with few of us teaching him when to reel in and when to pull. furthermore, he lifted it up from a bridge. lol.
gave the catfish to a malay couple crabbing nearby.

1st night (small catfish)
we caught 3 mini catfishes after that, this is one of them.
released them.

2nd day/night (a week later)
needle nose
i think that's the name of the fish? or aka swa ziam?
at our same spot, but we went earlier in the noon this time.
saw a few swa ziam swimming around and had nothing for about an hour so i decided to change to floater to try to catch them for fun.
10mins later, hook on! swimming around like crazy, left right up down. hook it up and my line was entangled like siao -.-
cut up to use for bait (which turns out not too bad)
-EDITED- found out that this is called the needlefish. (from the "identify the fish from HLF flat fish
my friend tried using small hook with dead prawn. surprisingly caught this flat fish. not bad, at least we know there are other types instead of only catfish
gave to a malay family packing up.
-EDITED- realised its called flounder :P

was quiet after that, no bites no catches. all the damn crabs eating up our baits.

crab
when i was reeling in, i felt something heavy, so i thought it was some rubbish (we got a lot of rubbish in between).
surprisingly, it was a sizeable crab. lol..
my friend took home to cook noodles. lol. big catfish
few hours passed, and we were about to give up, until my friend went opposite side of the bridge. then he shouted, got bite!
so i ran over and see, he hooked up this big catfish.
fatter than the 1st night there, but shorter.
then we realised, this doesnt look like a catfish, looks like a mixed breed.
i'd need some enlightenment here now. notice the 2nd photo, the tail and skin of the fish. looks like a normal fish with catfish head. anyone knows what fish is this?
my friend took home.
-EDITED- realised its called sagor catfish :P is it rare? mini garoupa
finally, i got a small bite. if im not wrong, it's a grouper right?
released it.

we saw this huge fish swimming around but it was too late and we couldnt stay.

That's a good account of your fishing trip, I love hearing about interesting little details.

I'll PM you my email address and you can send the pictures to me. I can upload and embed the images for you. Alternatively, you can upload it yourself to an image site like http://imgur.com and copy the generated "BBcode" and paste it in the relevant part of your post. Looking forward to see your pictures.

Edit: Okay, I've embedded the pictures for you. The Sagor catfish is not really rare, from my experience these catfish are more common nearer to coastal areas especially where there are mix of fresh and saltwater. As such you'll find them near canal mouths, they sometimes travel quite far up canals as far as the tide can take them.

Thank you for your time to take the pictures and share it with us.
Top

thanks for helping to upload the pics peace!

ahhh...we thought this sagor catfish quite different.. so thought quite rare. lol..

i'll be there again soon! hopefully got nice catches and will continue to share more pics with you all.

yeah, my friend chop up the crab and found lots of roe inside!
he said it was delicious. lol...
and tonight we going there again, and he's buying the net for crabbing. LOL
Top

Good luck on your fishing trip tonight, have fun!

just back from my fishing trip an hour ago.
straight 12 hours overnight there.
all catfishes.
me n my friends went crazy seeing all the catfishes. lol...

and the crabbing net, kept catching hermit crabs!!!! even those baby catfishes were caught inside -.-

ended up releasing almost all of our catches cos they were all too small.

took back 2 average size catfish. not a very good night but luckily the company was good

Return to “The Common Fishing Hole”