by zenyoungkoh
How deep and what are the bottom features off the labrador park breakwalls? (facing bukom and sentosa side) Also past the slipway.

by Peace
They're actually rather shallow and very rocky and gradually deepens out. You can see what it looks like in the picture below taken during spring tide. These breakwater harbours a lot of groupers but snagging is preventing a lot of anglers from landing them. A good spot would be at the red beacon but I believe we can't fish there. Surfer anglers casting into the channel between Labrador Park and Sentosa have reported good results though you'll need to cast a considerable distance. 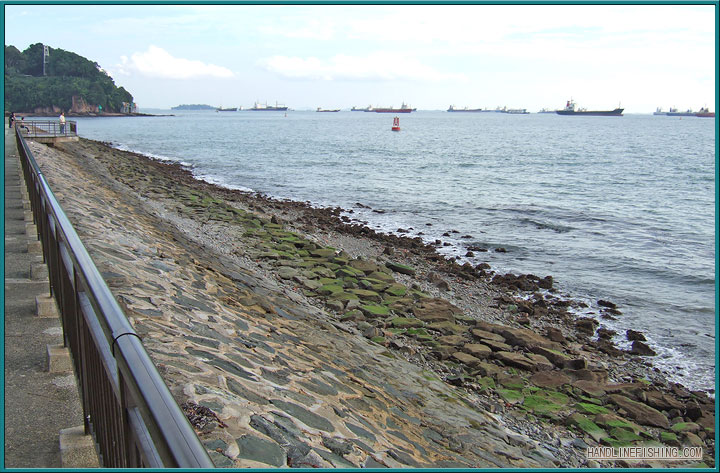 by BigBait
yup theres alot of snags around the whole place except fot the jetty but cant fish there anymore btw zenyoungkoh u are hugos friend rite ?

by zenyoungkoh
Thanks alot for the pictures and infos! I will be throwing soft plastics shrimp and swimbaits, all 3", with berkley shrimp scent. They are either rigged weedless or fish away from the bottom. so im not super worried about snags. yea im friends with hugo lol i should start using a fake username lol

by zenyoungkoh
By the way, is the current strong over there? I will be using a 3/8 oz jig head, is that good enough for it to not get push around by the current, but still maintain a okay sink rate?

by Peace
The current isn't as strong as it used to be since the extension of the pasir panjang port which messed up the current flow at Labrador Park. Your jighead weight is fine, I would say that wind can often be a bigger problem to you than the current there.

Word is, somebody landed a 3kg grouper in the park in recent weeks.

by mannpari
You need to cast further out for less problems.

mannpari wrote:You need to cast further out for less problems.