What is handlining, and the basics?

For anglers who handles the fishing lines with bare hands.

A Sport is an activity that is governed by a set of rules or customs and often engaged in competitively.
Sports commonly refer to activities where the physical capabilities of the competitor are the sole or primary determiner of the outcome (winning or losing)
Reference from : http://en.wikipedia.org/wiki/Sport

So handline fishing is a sport as you're not allowed to use rod, only handline and its physical very

It is RAW, it is physical, its just men vs fish.

As a footnote. Earlier someone posted a mention about Streamlines hand lines
http://www.moontrail.com/accessrs/a-misc/handline.html
http://www.streamlines.com/
I got one of these rather inexpensive items from the USA. and the setup more or less doubled the length of my cast and increased my accuracy.I'm new to fishing and handlining but I appreciated the extended reach form the shoreline into my local inlet.

The only drawback is that the rig recommends that you do not use line that is stronger than 10 lb ( 4.5 kgm)test.

Otherwise I'm delighted. I was using round rigs before which unless I unraveled the length I wanted to try to cast before casting, would drag on the line when in motion through the air.

[SITE SUGGESTION: Why not create a wikispaces/wiki page and generate a handlining FAQ which folk could contribute to. It could enrich the glossary. There's nothing on the web that can match the experience being aggregated here. I also think it lacks a few photographs of peopl in the throws of fishing rather than what they catch.]
Top

Your idea of a wiki page would work, but only if there is a group of dedicated people working to keep the page updated. That alone would scare a lot of people off, most people are either too busy, or too new to be of any help (like me).
Look after the oceans, for you merely borrowed it from the future generation.
Top

ratbagradio wrote: I was using round rigs before which unless I unraveled the length I wanted to try to cast before casting, would drag on the line when in motion through the air.

Is it possible for you to show an illustration of this rig? I don't know what it looks like.


ratbagradio wrote:[SITE SUGGESTION: Why not create a wikispaces/wiki page and generate a handlining FAQ which folk could contribute to. It could enrich the glossary. There's nothing on the web that can match the experience being aggregated here. I also think it lacks a few photographs of peopl in the throws of fishing rather than what they catch.]

This is a good idea, I will certainly take that into consideration. But I have concerns on upkeeping the wiki as Joseph have mentioned. Wiki are prone to defacement by cyber vandals and there must be consistent time and effort put in to sort, manage and verify the data. But I must agree that it is a good way to get inputs. I have limited webspace so I will have to see how much of it is going to take.
Top

ratbagradio wrote: I was using round rigs before which unless I unraveled the length I wanted to try to cast before casting, would drag on the line when in motion through the air.

It's a simple round spool. Nothing special.

Streamlines is H shaped with a light rig.

I've also got a Waaycool Handline http://www.waaycool.com/wc_kyk_const_price.html which is a horse of very different colour.

It's designed for fishing the bigger sea creatures while seated in a kayak . Because of its line weight -- it has a very limited cast. Beautifully designed though. Since I've just recently got it I'm yet to explore its use.
Top

The Waaycool Handline looks pretty interesting. It uses a rope as mainline attached to a mono shock leader, that's kind of heavy as you've mentioned. You probably don't need to cast (at least not far), more likely just dropped it down directly since you can move using the kayak. The spool design doesn't seem too look very efficient for casting anyway.

I would like to hear about your feedback on this spool once you've tried them out.

Peace wrote:Let me introduce you to some common rigs used here. First is the long snood bottom feeder rig. which looks somewhat like this:

This rig is suitable for fishes near bottom, for use with live or dead baits. Typical baits used on this type of rig are squids and baitfishes. Fish caught on this type of rig is often gut hooked due to the length of the branch line. (unless circle hook is used)

The next one is called the Apollo Rig, Paternoster Rig if you want. Consists of two short branches of the main leader.

This rig can be more generally used than any other rigs. Baits commonly used on this rig includes live/dead prawns, worms and squids. More effective if the line is guarded by the angler. ie. angler holding line/rod to aid setting of hook. Has good sensitivity to fish bites and reduces chance of gut hooking.

The third type of rig, or rather tackle, is Hong kong hook (or jigheads) that is more commonly used by handliners here. Simply tie the hook to a leader and connect the leader to the mainline using a swivel. Bait used is usually live/dead prawns. Can only be used at limited depth due to its weight, suitable for rocky or near shores. They're less likely to snag due to slow sinking, and able to attract fish's attention. It is baiting and luring combined.

You can find the definitions of some of the terminology in the glossary page.

Running sinker is a weight with a through hole. Hook line is inserted through the hole and the sinker can run along it, or rather, allowing the hook line to extend or retract from the sinker.

For the hook size used should be relative to the typical mouth size of the fish you're likely to expect. Even with the same size of hook, strength can vary greatly due to the material composition and thickness of the hook. If you want a number, I would suggest using size 2/0 - 4/0.

Common baits used here are herrings, prawns, sand whitings, worms, squids, bread, crabs, etc. It certainly does depend a lot on the species you're targetting. But for most part, herrings and prawns are most commonly used for saltwater fishing. On the freshwater part, we mostly artificial lures since most freshwater bodies are reservoirs which restricts the use of organic baits.

Hmm, there's certainly lots of people fishing at jetties and piers on our side, especially during weekends. Most shore anglers will use rods since they give them extra reach. Handlining is only suitable on jetties, piers and seawall. I don't find many handliners on shore, but they are still commonly seen used on boat fishing. Overall, local handliners are just a small handful of anglers, finding them online is far more rare.

I never really seriously tried lasso method of casting because it looks dangerous to me.

But I believe given enough strength, line and space to spin the line, it can actually cast further than the pendulum method.

Regarding the use of wire, you're right; it is necessary if you're expecting fishes with sharp teeth like pikes. Wire is a lot more abrasion resistant than nylon, so it can withstand the bites from the fish.

Tere must be targetting for huge groupers and rays, but I'd say it's still an overkill.

I may be laughing now, but wait till he shows us his monster fish he's going to haul up on his upcoming fishing trip.

I lost the original diagrams but these will show the same thing as well. Ignore the letterings.

This is the commonly known 'apollo' rig 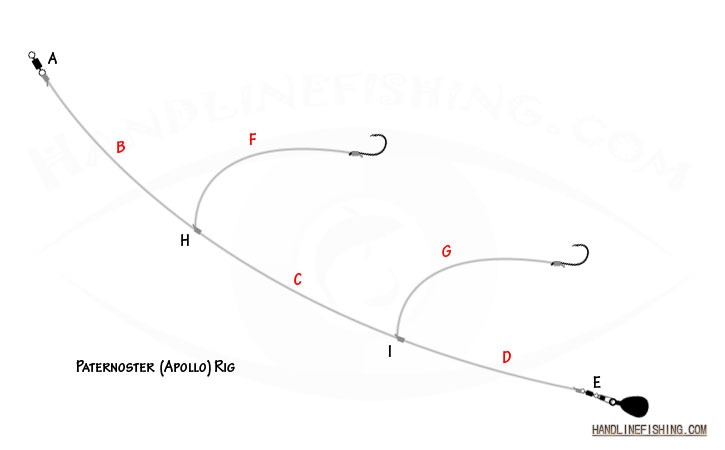 This is what a lot of surf anglers used for targeting bottom fishes, although there are many variants. 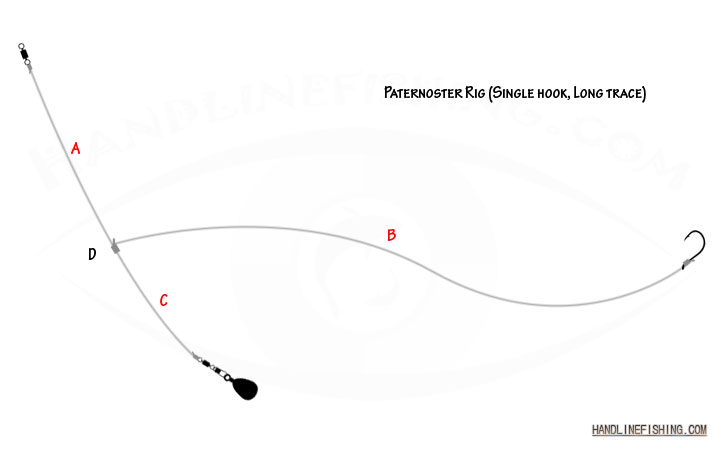